Healing and the Mind - 3 DVD Set 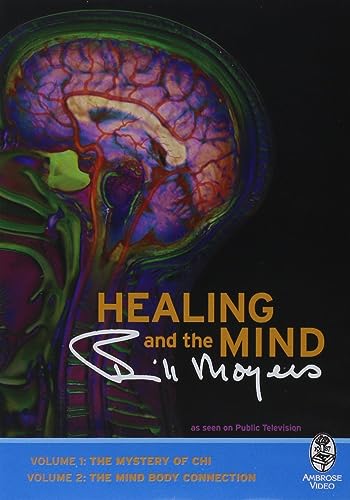 Ancient medical science told us our minds and bodies are one. So did philosophers of old. Now modern science and new research are helping us to understand these connections. In Healing and the Mind, Bill Moyers talks with physicians, scientists, therapists, and patients people who are taking a new look at the meaning of sickness and health. In a five part series of fascinating and provocative interviews, he discusses their search for answers to perplexing questions: How do emotions translate into chemicals in our bodies? How do thoughts and feelings influence health? How can we collaborate with our bodies to encourage healing?
With the incisive style that has made Bill Moyers' skills as an Interviewer legendary and the dynamic interplay of the many patients and professionals interviewed, Healing and the Mind is a documentary series destined to influence how millions think about sickness and health.
5 Programs on 3 DVDs
Programs in This Series:
Wounded Healers
Commonweal, a retreat for people with cancer who help one another heal even when a cure is impossible.
Mystery of Chi
Moyers explores therapies based on balancing yin and yang, and a phenomenon called Chi. Methods studied include acupuncture, massage and herbal techniques.
Mind Body Connection
On the frontier of scientific research, a look at how the nervous and immune systems are linked, experiments in biofeedback and the role of emotions in health.
Art of Healing
How hospitals across America are responding to clinical evidence that caring makes patients feel better, and get better.
Healing From Within
Two therapies that do not involve drugs or surgery: Eastern meditation and Western group psychotherapy.
Features:
Closed Captioned
Spanish Subtitles
Review
The relationship between emotional and physical well being is intriguingly explored in the extraordinary series... which seeks to understand the force of the human mind in healing. --Booklist
About the Actor
Bill Moyers is one of America's foremost journalists. He has received numerous rewards including: Gold Baton, the highest honor of the Alfred I. Dupont Columbia University Award, PEN USA Courageous Advocacy Award, Honorary Doctor of Fine Arts by the American Film Institute, more than 30 Emmys, Career Achievement Award from the International Documentary Association and has been honored by the Television Critics Assoc. for outstanding career achievement. He was elected to the Television Hall of Fame in 1995 and a year later received the Charles Frankel Prize (now the National Humanities Medal) from the National Endowment for the Humanities for outstanding contributions to American culutural life.
Return to Product Overview