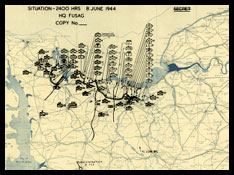 The Twelfth Army Group Situation Map collection provides interesting insights into U.S. Army operations in northwestern Europe during World War Two. The collection covers the time from the June 6th, 1944 Allied landings in Normandy to the Allied occupation in July 1945. Each map is a cartographic snapshot that preserves the day by day disposition of Allied and Axis forces as understood by the operations staff (G-3) of the First United States Army Group (FUSAG), and later the Twelfth Army Group. Researchers browsing through the maps can easily follow the Western Allies’ progress in Europe through the movements of the unit symbols and the front line. Even the casual browser’s eye can identify significant battles by the concentrations of unit symbols on the maps. However, the situation map collection has greater significance beyond their use as an easily interpreted display of the Western Front operations during World War Two.

In addition to providing the general scope of the campaign, the situation maps specifically provide excellent primary source information that reflects the incomplete and inaccurate information available to

the operational commander, General Omar N. Bradley, and his planning staff during the campaign. In contrast, official and academic histories written after the fact reconstruct the historic disposition of forces by using additional sources not available to the participants during the events. These post-facto reconstructions lift the fog of war and give today’s reader the power of omniscience not available to the commanders during the campaign. Any historian commenting on a commander’s past plans and decisions must use sources contemporary to the commander’s decision making process, such as these situation maps, rather than relying on enhanced reconstructions.

Although the most important and easily recognized information depicted on the map is the black overprint of the unit locations, there is other significant information including operational area boundaries between U.S., British, Canadian, and Free French forces, boxes showing Axis units believed to be in transit to Northern France, boxes listing “unlocated units,” and the addition of a red overprint showing the German states and pre-war national boundaries that was added after the armistice. Also after the armistice, a stop line between the Western Allies and the Soviet forces was added. Interestingly, the stop line was not static after the armistice and minor adjustments were made in the line between U.S. and Soviet forces in the Austrian area.

A closer examination of the unit symbols on the maps illustrates the incompleteness, uncertainty, and inaccuracies in the information caused by the fog of war available to the operational staff. Further, closer examination also yields evidence of wartime intelligence failures. For example, the vagaries in unit locations are shown by the annotation “not confirmed” while uncertain unit identifications are noted by “?” next to the unit symbols. Significantly, these annotations were not only applied to Axis units, but were also applied to U.S. and Allied units such as the U.S. 101st Airborne Division on the June 6, 1944 map. This indicates that the operations staff was uncertain of the location of one of its own units at the end of the first day of the Normandy invasion. Equally significant are the recognizable intelligence failures evidenced by the absence of Axis unit information on key dates. One example is the Ardennes Forest area that was devoid of Axis units opposing the U.S. forces on the December 15, 1944 map. This map is clear evidence of Allied intelligence’s failure to identify Axis units before the Battle of the Bulge. Also, as the Battle of the Bulge developed and Allied intelligence improved, many previously unidentified Axis units start appearing on the situation maps. Whether viewed in its entirety or as single sheets, the Twelfth Army Group situation map collection is an excellent historical resource.

The maps are quite detailed and are approximately 6600 x 6000 pixels in size.

These maps may be viewed on your computer or printed out. To view the maps, you must install the free Map Viewing software which is included on the DVD. This is a 30 second process and will allow you to view and manipulate/print all the maps in this DVD collection in full detail. There are versions for Windows platforms and full installation instructions are included on the DVD.